A ‘peak-full’ ascent of mt Olympus – the “Mountain of the Gods”.

Using 4×4 vehicles, we drive to Christakis mountain hut at 2.500m. Leaving the vehicles there, we’ll take the Secret Path towards Skolio and Zonaria ridges. Continuing our hike up, we will ascend Mytikas peak (2.918m) via Louki and close the day on the Musses Plateau (2.700m) where we will enjoy an overnight stay in one of the mountain huts. The next day, we will climb to Profitis Ilias (2.788m) and Toumba (2.801m) having completed a fast & beautiful 2-day Alpine tour of Mount Olympus.

10:30 am: Our hike begins on the E4 European path. We follow the trail leading us under Skolio peak and continue until the junction with Zonaria, where we switch path, to arrive at the base of the Mytikas Louki.

11:30 am: There, we leave our backpacks and put on our protective gear to safely climb Mytikas. Having summited, we head back the same way from Louki.

16:30 pm: Arrival in Musses plateau, where we stay overnight in one of the mountain huts. The view from the plateau is unique – mountains, horizon, sea and a beautiful sunset!

07:30 am: It's early in the morning, but we're ready to head out and enjoy the unique view of Stefani (Zeus’ Throne), while having breakfast. Preparation for summit ascends!

08:30 am: We start our hike towards Prophitis Elias (2.788m), where we can visit the highest church in the Balkans and then continue to nearby Toumba (2.801m), before returning once again to the mountain hut.

10:30 am: We say our “farewells” to the beautiful plateau and following the Zonaria trail and then E4, we aim to ascend Skolio peak 2.912m. With clear weather, we’ll have a 360 view of the mountain! Continuing on E4, our descend will take us towards Megali Gourna and Christakis mt refuge where the 4×4 are parked.

The Giosos Apostolidis mountain hut was built in the summer of 1961, by the Mountaineering Club of Thessaloniki (S.E.O.) at an altitude of (2,697m), on private property. In 1962 a second floor was added to the building, increasing its accommodation capacity to 80 guests. The mountain hut is fully operational from early June to October, and can operate also during the rest of the year in agreement with the huts’ management. During the winter, the mountain hut remains open as an emergency refuge.
READ MORE 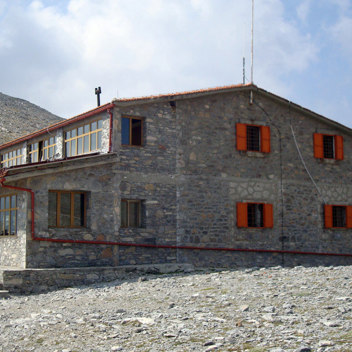 On this wonderful alpine route, we will cross Mount Olympus from West to East. Using 4×4 off-road vehicles, we will gain altitude to reach Megali Gourna and Christakis mt hut at 2.500m. From there, following the Secret Path (E4), we'll traverse the ridge of Skolio and continue on a downhill course to enter the famous Zonaria path, with its magical view – the high peaks on one side & the Aegean Sea on the other. Arriving at the base of Louki of Mytikas, we'll prepare ourselves for the ascent to the highest peak in Greece! After summiting, our day will end on the beautiful Musses Plateau at 2.700m, where we will stay overnight in one of the two shelters.

On the 2nd day, after enjoying the sunrise and our breakfast – overlooking the Throne of Zeus (Dias) – we'll hike a fairly good trail to reach Prophitis Elias at 2.788m, where we can visit the highest church in the Balkans and then continue to Toumba 2.801m. We will return from Zonaria on E4 and reach our 4th and last peak, Skolio at 2.912m, thus completing the four high peaks of our tour!!!

For safety reasons, the summit attempt to Mytikas may take place on the 2nd day. Also, for safety reasons the guide reserves the right to make the final decision on whether to summit, and make changes to other routes followed.

When is the activity available

When is the best time to hike on Mt Olympus

The climbing season runs between mid-June and late October. Sometimes, the climbing season can start even in mid-May, but this depends on the snow accumulation from winter months. The best time to climb Mount Olympus is beginning of July and beginning of September. Mid-July to late August is also a good period, however it may become too warm and the possibility of afternoon thunderstorms is increased.

The weather conditions on Mount Olympus are generally unpredictable and temperatures can vary widely. Several factors influence local weather such as the impact of the sea and the rugged relief of the region.

In lower areas, however (Litochoro and the foothills) the climate is typically Mediterranean, i.e. hot and dry in the summer, while humid and cold during the winter. On a higher altitude it is more humid and rougher, with more intense phenomena.

The temperature varies in the winter from -10 °C to 10 °C and in the summer from 0 °C to 20 °C, while winds are an almost everyday occurrence. Generally, the temperature falls around 1 °C for every 200m of elevation. As the altitude increases, the phenomena become more intense, and the variations of temperature and humidity are often sudden.

The coastal northeast slopes of Olympus receive more rain than the continental northwest, so, as a result, there is a clear difference in vegetation. In some places the winds accumulate snow, 8–10 meters thick, (‘anemosouria’ in Greek), while in some deep ravines snow remains all year round.

However, during the climbing season (June to October) these snow patches do not affect hikers. Weather conditions on Mount Olympus may change several times during the day. During the summer, rainfalls are frequent and evening thunderstorms very common, many times accompanied by hail and strong winds.